Summary and Photos From Our Recent August 10, 2010 Genealogy Program; Speaker Bibliography Included Near End of Post

All that I can keep saying is that you are one incredible group of genealogy researchers!

A total of 70 of you came out and attended our most recent genealogy program that we presented on August 10, 2010. Thank you  for taking the time to come out to one of our genealogy programs.

Ginger Frere was our guest speaker for the evening.  Ginger’s past programs at our library have also turned out some large size crowds.  Ginger presented her program to our audience on August 10, 2010 titled “Looking for Love in All the Wrong Places – the Search for Marriage Records”.

I opened the program at 7:30 PM by having those in attendance that were new to our programs introduce themselves to us.  We had about 8 new participants in our audience.  Each just gave us some brief information as to their name, how new they are to genealogy and what are some of the major surnames they are searching for.  Each participant received a “Welcome Package” of introductory material on genealogy from our library.  The package contained some information on genealogical materials in our library, information on participants that are participating in our program and surnames being searched by participants. 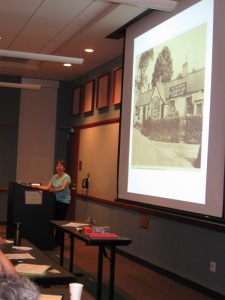 We are also happy to include in the genealogy welcome package an introductory genealogy book authored by Jeffrey Bockman, one of our frequent genealogy speakers at our program.  The title of his book is “Give Your Family A Gift That Money Can’t Buy: Record And Preserve Your Family’s History”.  It is a very good book that can be especially helpful to the novice and beginning genealogy researcher.

After introductions of new participants I then proceeded to briefly review the “handouts” I created for this program.  This included some information on some upcoming genealogy programs within our geographic area for September 2010.  I also included some handout material on a few topics I discovered within Dick Eastman’s genealogy blog that were timely and topical to share among those present.  I also included some material on some articles I came across within some of the genealogy journals that our library subscribes to.

A PDF file of these handouts and an archive of previous handouts is included within this blog on the right sidebar of the blog under the category name of “Handouts”.

The reader of this blog will also find PDF files of our monthly library’s genealogy newsletter that is extensive in size and is included in this blog also along the right sidebar of this blog under the category name of “Newsletters”.

Part of Our Large Audience Listening Intently to Ginger's Program

I encourage readers to take a look at this material to allow them to keep up with things that are newsworthy in genealogy.  The newsletter also contains  information on our recently added genealogy journals and information on any newly added genealogy books to our collection.  You do not have to struggle with paper copies anymore.  These files are always here to access.  The Newsletters have been created with Bookmarks and Hyperlinks for easy maneuvering within the document.  Internet web links can be accessed from within the document taking the reader directly to the web page of interest.

Ginger started her program at around 8:00 PM.  She shared with us historical background on the involvement of civil institutions as well as religious institutions in their role on documenting the act of marriage.  The Catholic Church has required the documenting of these major religious events in a person’s live since the mid-1500s.  This would include Baptisms, Marriages and Deaths as well as other religious events.  For a Catholic to become validly married, the paper trail of a valid baptism had to be shown in order for a valid marriage to occur. 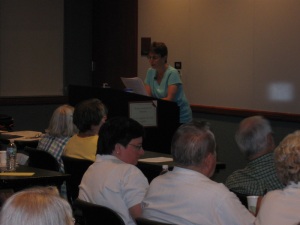 Consequently, all of these events in life leave a wonderful trail for the researcher to discover about their ancestor being researched.

Ginger shared a good deal of information on what we may have heard in the past called “Gretna Greens”.  I would encourage the reader to just do a Google search on the topic for further information.  The concept of this “Gretna Green” is liken to a “marriage center” that draws brides and grooms to leave their own local areas and tie the knot of marriage in these geographic marriage areas.  Enticements were often made by local governments, or businesses, to entice marrying couples to come to their area to get married rather than in their own local area.  Marriage license costs and other fee based marriage requirements were often eliminated or reduced so the prospective couple would be married outside of their area rather than in their own home location.  These married couples might very well stay in the area for some recreation and enjoyment and spend their money in these “Gretna Green” locations as tourists, vacationers and honeymooners, spending their money in these areas rather than back home.

Ginger’s presentation on these sites explained a puzzle to me in my own personal research.  I had many couples in my ancestral research that indicated they were married in Crown Point, Indiana.  All of these people lived in the Chicago area.  Crown Point was not that far away across the Indiana border and was easily accessible with good transportation.  In essence Crown Point, Indiana was a “Gretna Green” of its time back in the 1900-1930 timeframe in our area.

Thank you Ginger for helping me better understand why Crown Point, Indiana was so common in marriage records I have researched. 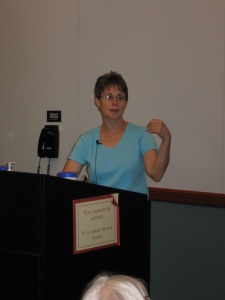 I would venture to guess that many researchers will find similar events in the lives of their ancestors about marriages that took place out of the expected geography where they should have occurred.  Dig deeper into discovering the “Gretna Green” locations at the time of the event and you may very well discover your “Gretna Green” marriage mill that attracted so many marriages for reasons other than “love”.  Ginger’s “Gretna Green” locales sure helped demystify my mystery!

Maybe the reason you also can’t find a marriage record for someone you assumed would have gotten married in their own locale is that they crossed a county boundary or a state line to take advantage of a marriage elsewhere that was less expensive to do because the marriage license fee was waived or some added perks were included to the bride and groom for getting married at location A rather than location B.  Our ancestors were also aware of the economies of getting married.  If they could accomplish their goal and save some money while easily transporting themselves to this locale, then maybe you will discover their marriage records in these locales rather than in their own backyards!

Ginger also shared with us the dark side of marriages during times when certain ethnic groups were by law forbidden to marry those of other ethnic groups.  This was applicable in certain counties or areas of the country where African-Americans and Native Americans were forbidden by law in their local from marrying into other ethnic groups.  In this case, you may not find evidence of marriage records simply because by law at the time no marriage could have taken place.

Ginger’s presentation shows why it is important to take a step back from searching databases and to formulate a better understanding of the history surrounding the time of our ancestors.  Don’t always think of the omission of finding someone in a database is due to a database problem or a record omission.  Rather, the ancestral record may not be included because it did not occur the way you thought it was supposed to!  Ginger also made the point that we should know the geographies of areas.  Did someone live close to a different county?  How about close to another state (think Chicago and the closeness to Wisconsin and Indiana)?  How about knowing whether there was a rail line nearby that could take someone easily to another county or state?  How about a river that could do the same?

Ginger has now opened up our eyes to look a little deeper when we are having a hard time finding a marriage record for someone we are sure got married in the area they lived.  After listening to Ginger, the possibility is that there were many factors that might have drawn our ancestors away from their local area to get married somewhere else.  Especially now, if you have been using databases for a given county marriage records, take a look at a map and see what surrounding counties are nearby or counties of other close by states.  Consider searching these and not just the ones where they lived.

Ginger was kind enough to allow me to post her bibliography of the evening’s program.  You can look at her bibliographic handout for the program at https://genealogywithtony.files.wordpress.com/2010/08/0810-ginger-frere-handout.pdf.  As you can see it is a PDF file of the material that I have uploaded to WordPress.  Take a look at it for further references to help you pursue and better understand how to make our quest for marriage records even more productive.

Ginger, thank you again for an outstanding program.

We hope to have you back for another program in the near future.

And to all those that attended Ginger’s program, we thank you for taking the time to come to our library and to see a very good program from Ginger Frere.

We hope to see you again for next month’s program.

This entry was posted in Program Summaries, Tips. Bookmark the permalink.